It is with great sadness that we announce the passing of long-standing South African community member, Mr Eugene Wong on 18 April. One of the first things that come to mind when thinking of Eugene is his unwavering enthusiasm for Springbok rugby (even when the Boks ‘played kak’). He could always be found in the Castle Corner at the Rugby Sevens, proudly donning his Springbok jersey. Eugene was also a supporter of the SAAHK community and assisted with the management of our Facebook group in past. He was an active member of the South African community in Hong Kong. Eugene was well known and loved by many for his friendliness, enthusiasm for all things South African and his great sense of humour. 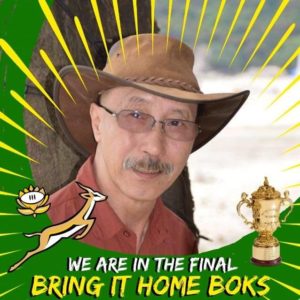 Eugene’s love of South Africa was kindled after visiting the country for the first time in the early ‘80s. In 1990 he moved to Johannesburg and made it his home for the next 16 years. When he moved back to Hong Kong in 2006, he brought the spirit of Mzansi with him and made sure that he was never too far from a good braai, biltong or a Black Label Whiskey. Eugene was very proudly South African and always travelled with his South African passport despite the fact that he also had an HKSAR passport. Eugene will be greatly missed by the community and we would like to thank him for his years of support and love for our beautiful home country. We are sending all our love to his family during this difficult time and would like to thank his daughter Eugenie Wong for providing us with photos and information about Eugene.